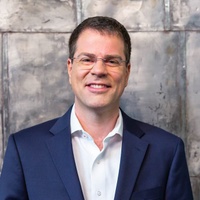 Damian supports the planning and investment teams, and serves Buttonwood’s earliest clients, some of whom represent three generations of the same family.

"I enjoy simplifying the math involved in financial planning. Frankly, investments and insurances don't have to be a mystery either. It is deeply gratifying when clients make informed choices after seeing the answers leap off the page."

After spending his childhood in Ellicott City, Damian raised his own children in the same area. Damian Jr. and Haley attended the same high school as their dad and had some of the same teachers. Damian and his wife, Shannon, reside in Arnold on the Magothy River. Active in the local Catholic community, Damian has served on the Archdiocese of Baltimore Capital Fundraiser campaign, his church finance committee, and as a Sunday school teacher for 20 years.

In a nod to his Italian American heritage, Damian’s first job (at fourteen years old) was making pizza in an Italian restaurant. Damian’s well-honed pizza making skills are rumored to be the best among his seven siblings.